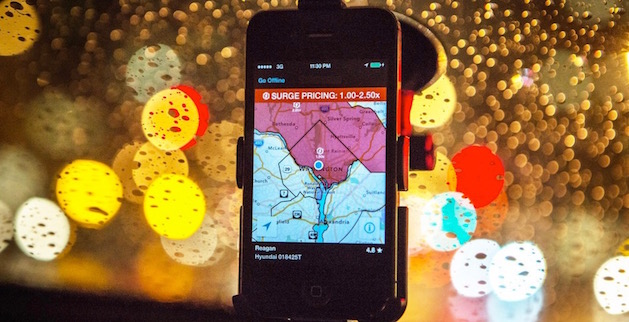 What is Surge Pricing?
Well, basically, it’s a rideshare company’s policy of raising prices during times of heavy demand. The extra cost could be triggered by the date, such as certain holidays. It could also be due to the time of day, as is the case during rush hour. It could even be triggered when the company is receiving many pickup requests from a certain neighborhood.

Isn’t surge pricing just a money grab?
The companies that use it, justify surge pricing as a way to ensure that enough drivers are available to meet the demand from passengers. When someone wants an Uber or Lyft and the surge is in effect, it tends to be a time when drivers would rather avoid being on the road because they’d rather enjoy the holiday or stay out of the traffic snarl the area is experiencing. The idea is that extra money on fares will encourage drivers to accept fares in spite of the inconveniences.

It seems to make sense, so what is wrong with it?
The first problem with the model is that there is theoretically no limit to how high the rate can surge. If there is tremendous demand, their system automatically increases the price until enough fares are taken care of to lessen the demand. This keeps going until the demand drops or the hour or date changes, in the case of scheduled surges.

The second problem is complaints from both passengers and drivers that, even after a fare has been requested and accepted, the system can cancel the ride during a price surge. This means the passenger and the driver will both need to agree to the new, higher price. Whether it’s done through system error or deliberate price gouging, few things are more infuriating to consumers than agreeing to a certain price for a service, only to have the company turn around and demand a new agreement and higher price.

OK, now it seems bad. What is being done about it?
Lawmakers across the nation are looking into the situation and proposing new legislation that won’t necessarily eliminate the practice, but rather regulate it. They accept the premise that high demand may require higher costs, but want the increase to remain within reason.

Passengers who use transportation services are not waiting around for the slow wheels of government to address the situation. Many are boycotting companies that abuse the practice and going with companies like LA City Cab that offer services for a consistent rate.

No Surge Pricing with LA City Cab
Regardless of day and time, LA City Cab does not implement surge pricing. Our drivers are always around and ready to take you where you need to go without surge pricing. Book a ride with us today and don’t pay a penny more than you have to.