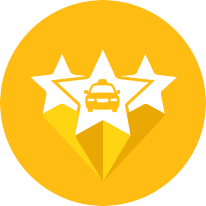 Time and time again, our drivers hear the same thing from visitors to Los Angeles: sightseeing tours in LA are more fun than anywhere else!

Where else can you tour Hollywood and the sprawling, beautiful Griffith Park in the same day? Catch a wave in Santa Monica and then grab dinner in a trendy urban setting? The possibilities are nearly limitless, and LA City Cab is ready to provide you with the most economically efficient way to take a sightseeing tour in Los Angeles.

Since LA City Cab’s drivers are residents of Los Angeles that see nearly every corner of it because of their profession, we can provide services that range from quickly dropping you off to a place you have in mind, all the way to designing your own custom itinerary of places that are must-sees in the city.

What makes LA City Cab your best bet as a Los Angeles sightseeing guide? For starters, we never surprise you with “surge” pricing like certain other ridesharing options. With LA City Cab, you know you’re getting a driver who has been fully vetted and background checked, and who won’t “surge” your price late at night or at the moment you need a ride the most.

Places to See in Los Angeles

Thinking of visiting our beautiful city soon and looking for ideas of things to see in Los Angeles? Take a look at some of our drivers’ and staff members’ favorite spots in their home city of LA!

Well, there you have it. There’s so much to do and see in Los Angeles, and now you know the best way to get around town — LA City Cab! We’re convenient, with predictably low pricing, and you can have peace of mind knowing the extent to which we screen our drivers before hiring them.

We hope your next trip to Los Angeles is a great one!